It was my first time at Sumosam in Powerplant mall.   I found the blonde hair on the tsinito waiters a nice touch in enhancing the quirky take of the restaurant on Japanese food.

Posted by Unknown at Saturday, December 31, 2011 No comments:

For Christmas, I originally wanted to give the queen a Lady Gaga headset.  I am not sure if it has been discontinued or if there were too many people who had the same gift idea - but I can't find it in any tech outlet.  The next best thing that I can think of is a computer bag.  She'll be able to use it everyday.  I need to make sure that it's durable and stylish ( and will go together well with her designer purse ).

When I grabbed this bag from Fino - I knew that I she will love it.  The only concern I have with it is that it doesn't have any padded lining - so I went to the nearest CD-R king and grabbed a laptop sleeve.

Here are the pictures of the bag.  I'm happy to say she loved it -- she's so excited to use it that she brought it to her Hong Kong trip. 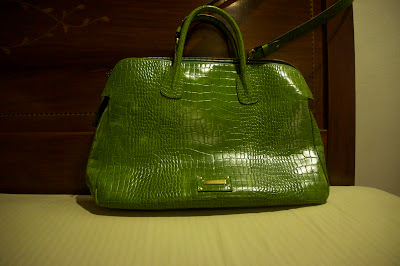 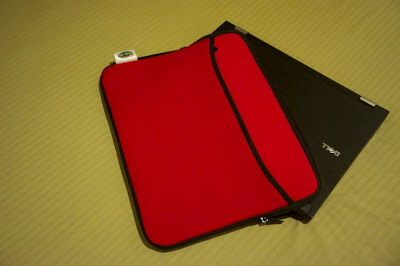 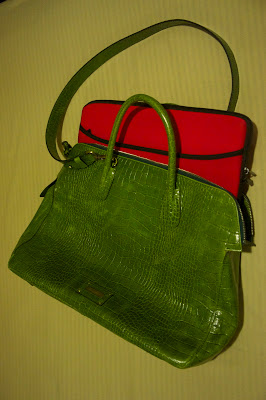 Email ThisBlogThis!Share to TwitterShare to FacebookShare to Pinterest
Labels: Closet

The iPhone 4s ( and the iOS 5 ) has attracted a lot of criticism for being a power hog.  I am actually worried about this problem because I don't want to end up with a dead phone during my day.   To remedy the situation - I did a four day experiment to determine what settings I can use that will allow me to maximize my use of the phone - with the least number of charge in a day.   BTW - as a disclaimer - in case I do end up with a dead phone midday - I have a portable backup power source.

All features turned on all the time.  This means that I had push e-mail on.  I also had the Cellular Data network turned on.  Wifi is on and I also had it checking for available WiFi networks. 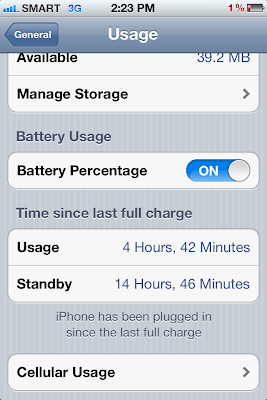 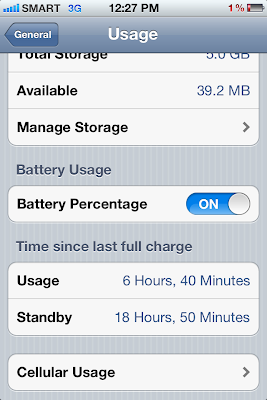 I think I reached the sweet spot on the third day.  I switched off cellular data network (but switch it on occasionally when I need to surf and there are no WiFi connections available),  I switched on WiFi - but I switched off the option to check available networks.  Push e-mail was turned off.   I also kept running apps to a minimum - especially those which tend to fetch data online ( for example - Twitter ). 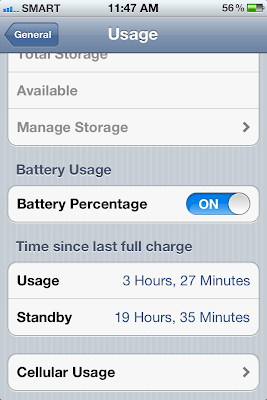 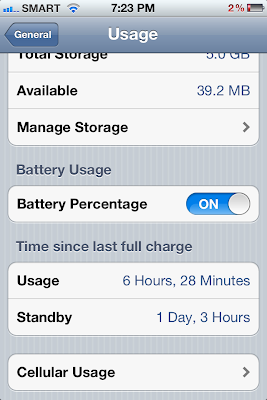 I switched on Push e-mail - but kept Cellular network turned off ( on when I need it ).  I continued to keep running apps to a minimum.  WiFi is always on but checking on available networks is Off. 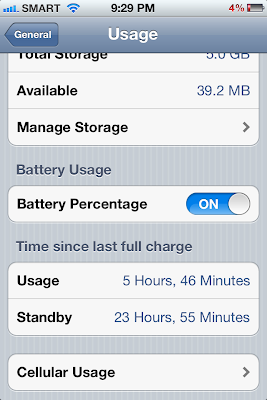 From my experiment - it seems like the maximum hours of usage for the phone is six hours.  This is pretty much aligned with what Apple advertises.  My phone usage is mostly for online surfing.  I rarely use it for calling ( since most phone calls are for work - and I have a company issued phone for that ), I also rarely text.   Music is around one hour a day and I rarely watch videos on the iPhone.

This just means that I can use the phone every day and have it charged while I am sleeping.

Do any of you have different settings that seem to have maximized the battery life per charge of your iPhone?
Posted by Unknown at Thursday, December 29, 2011 No comments:

I Got an iPhone from Smart

I am a Smart subscriber.  I have been a Smart Subscriber since 2007.  Because of this - I never had an iPhone.  Apple had an exclusive tie-up with Smart's competitor in the Philippines: Globe Telecoms.  I know I could have bought an open line from Hong Kong - but I never really had a compelling reason to get one.

In the past couple of years - Apple has slowly crept into my life.  It started with the iPod classic,  then it moved on to the iPod Touch ( generations 3 and 4 ), then it was the Mac Airport express,  then it was the first generation iPad, then the Macbook ( which I'm using as my personal computer ).  So it just made sense for me to complete the whole family and finally get an iPhone when Globe lost its exclusive distribution tie-up with Apple.

I've been using the phone since December 23 - and I must say that I love the phone.  I love the fact that with just this phone - I'm able to leave the following gadgets home:

I am not really an Apple Fan boy - but I really love my iPhone 4s.  The only problem I have with the iPhone is it's battery capacity.   From my experiments ( and I will talk about this in another post ) - I can only get at most 6 hours usage ( and between 15 to 26 hours standby time ).   This is why the Powerboost gift I got for Christmas comes handy. 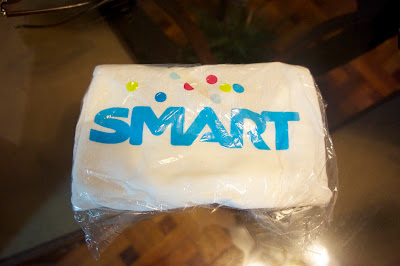 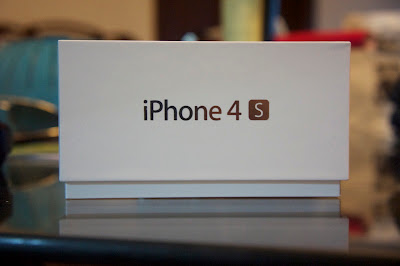 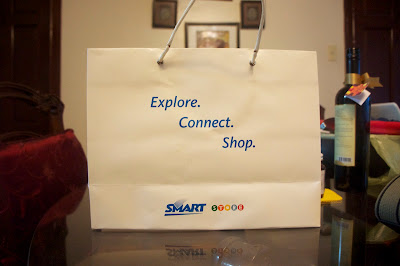 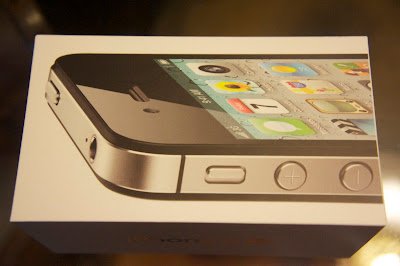 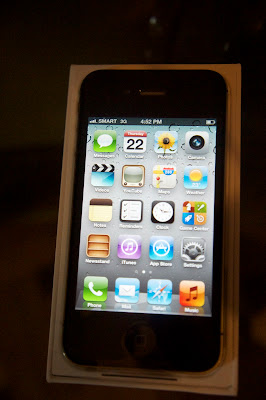 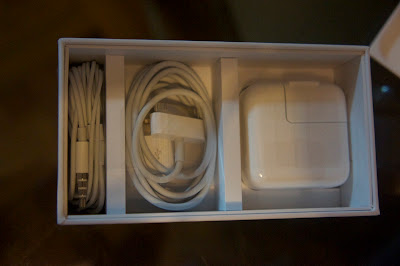 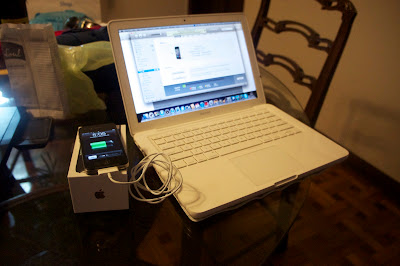 Posted by Unknown at Wednesday, December 28, 2011 No comments:

Look at what I found under the Christmas tree?  This is the queen's gift to me.  It's a back-up battery and dock for my iPhone 4s.  It's a very appropriate gift since I have a problem with the battery capacity of iPhone 4s. 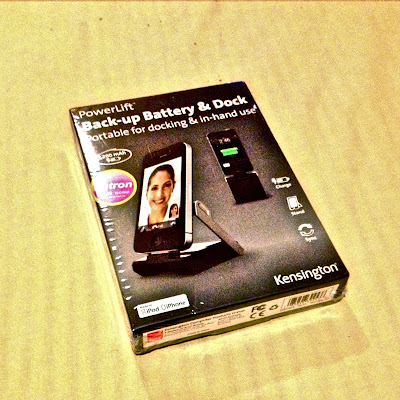 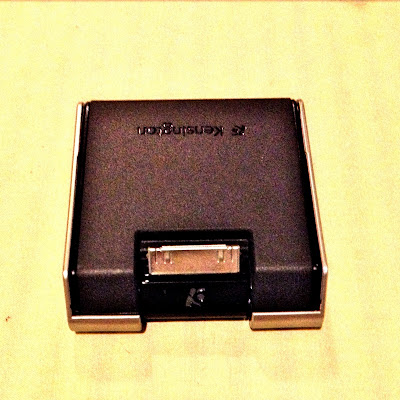 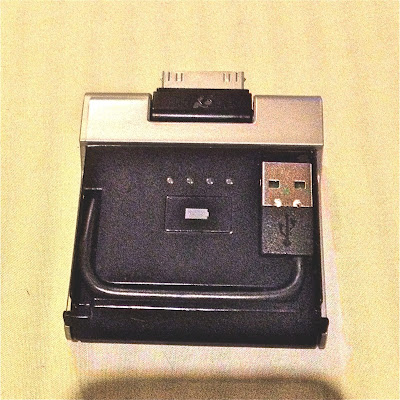 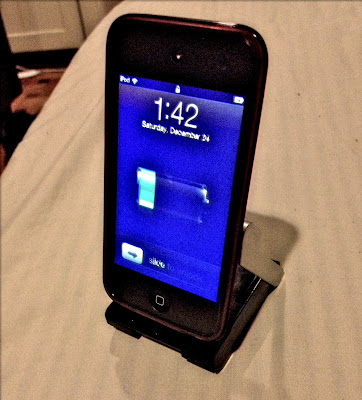 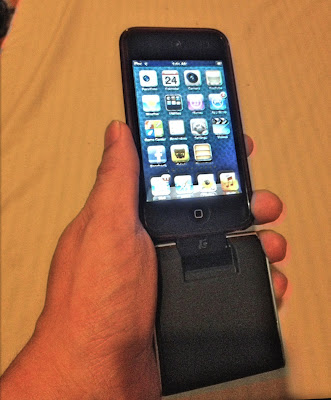 I've tested it and found that it can fully charge the iPhone when it is fully charged itself.   This is definitely an awesome gift - just what I wanted.

Did you get a gift from your wish list?
Posted by Unknown at Tuesday, December 27, 2011 No comments:

Breakfast at the Peninsula Manila

The Peninsula is our favorite hotel in Manila.  We love hanging out at the lobby and when I still smoked and the lobby was still a smoking area - we consumed gallons of coffee staying at the lobby.  For us - even if we stayed there every week - each visit is special.

We don't get to visit the Peninsula that often anymore.  However, like before - each visit to the lobby is special.  That was definitely the case when we had breakfast there last weekend. 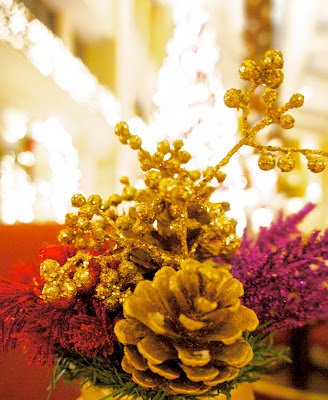 Filipino breakfast is heavier than the typical breakfast that Americans are used to.  We have rice - or noodles - or dim sum.  I remember having a hard time when I lived in the states and I had to just eat cereal for breakfast - by mid-morning - I was famished. 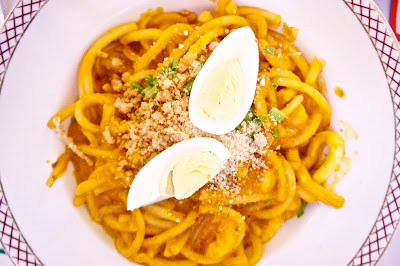 For breakfast - I felt like having Pansit Palabok   The noodles are heavy on the stomach but tasty.   I couldn't finish the whole serving. 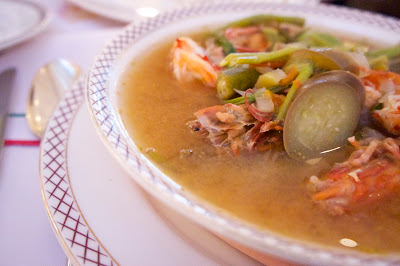 One of the queens had Sinigang for breakfast.  This is tamarind-based soup with gigantic prawns. 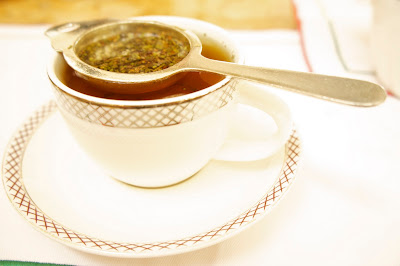 I never really had loose leaf tea served this way.   I like it. 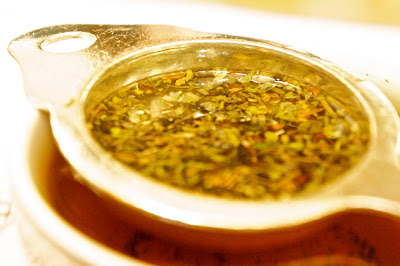 Next time - I write about the Peninsula lobby - I will definitely order their desserts.  They were not available for breakfast - which is a bummer - but they have some of the best desserts in town.

Posted by Unknown at Monday, December 26, 2011 No comments: Links to this post

From us at the house of queens,  we wish you a Merry Christmas!

Here are some pictures that we took during the Holidays.

Email ThisBlogThis!Share to TwitterShare to FacebookShare to Pinterest
Labels: Christmas

I am not a big fan of steak.  This is why I never tried Myron's in the past.  It's a steak house - so what am I going to eat there?  That is why I was surprised that they have options in their menu that I found appetizing.  I ordered their binagoongan ribs.  They did a great job with this dish.  To think I just had a mean binagoongan two days before ( cooked by our trusted Nanny ). 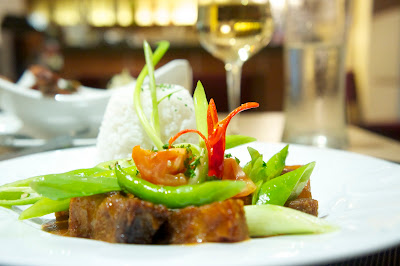 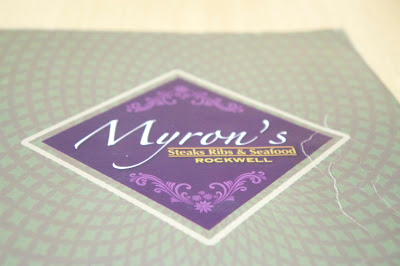 Apart from the binagoongan - we also tried their buffalo wings and their salad.  The buffalo wings were seasoned well and they are a must try.  The salad with salmon and miso dressing - I will not recommend.  I just didn't like the miso dressing. 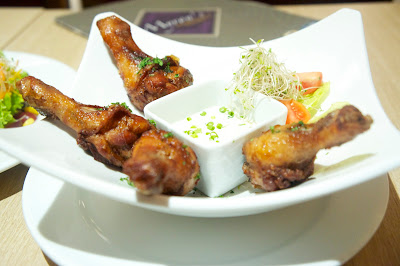 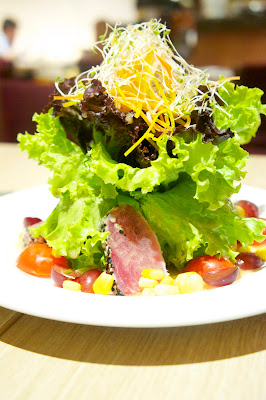 I think that after trying Myron's this time - I will definitely try to have another meal in Myron's in the future. 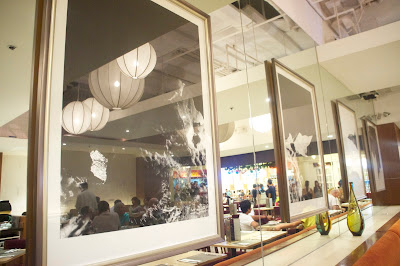 Posted by Unknown at Saturday, December 24, 2011 No comments:

For the past three years - Ayala Triangle had been the venue of a Christmas Lights and Sounds display.  It has actually become better every year.  It also has attracted bigger crowds every year.  The show starts in November and lasts up to the 23rd of December.

This year - the most amazing part of the show is when the "stars" are awakened at the start of the show.  The stars look like giant jelly fish hanging on the trees.  When the light show starts,  the starts start to inflate and they seem to stretch their appendages and come to life.

Watch the video that I captured of this amazing show.


I am looking forward to next year's show.

Email ThisBlogThis!Share to TwitterShare to FacebookShare to Pinterest
Labels: Christmas

The queens discovered a new burger joint.  It's called Big Better Burger.  We wanted to check it out and see if there's any truth in their name.  Our verdict - their burgers (and sandwiches) are definitely better than your average burger.  You don't believe us?  Start with the pictures below - then check out their outlet at Jupiter st. in Makati.  I'm sure you won't be disappointed.

Posted by Unknown at Thursday, December 22, 2011 No comments: