Semar and his Sons

We were having lunch at Talking Tongues.  They serve Indonesian food.  It's our go-to restaurant for good home-cooked Indonesian dishes.  We noticed that their dishes are not as hot as they used to be.   I remember eating there one time and there was an Indian national who asked his dish to be very spicy and he was overwhelmed at how hot the dish was.  I guess the owner realized that there's not a lot of people in the Philippines ( Filipinos and other nationalities alike ) who has as much tolerance as they did when it comes to spicy food.

While we were at the restaurant - I noticed that they have four statues that are interesting.  So I took a photo of them.   They are four men dressed in traditional attire. 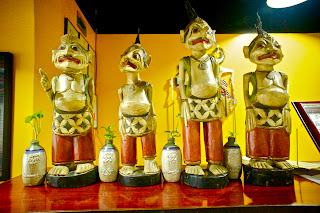 I didn't know who they were - and the owner was nowhere to be found so I couldn't ask anyone who these men are.  Luckily - I took a close-up photo of one of the men and found a tag on his belly "Gareng".  I goggled who Gareng is and found out he is the son of Semar.  Semar, his son Gareng and his two other sons Petruk and Bagong.  They are characters in Javanese mythology.  If you are familiar with the shadow plays called Wayang - these four men - especially Semar are commonly found in them. 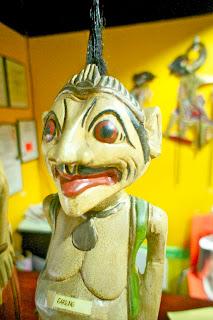 Oh - there's another interesting part in these pictures.  The bottles which contain these leaves have an inscription : "Krysty Nourishing Leaf".  I tried to google for this brand but couldn't find anything.   The bottles are pretty and I must say that they actually fit well with the overall display of the four men. 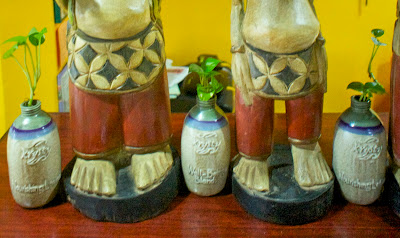